The Club auction was held, as usual, in the Scout Hut at Harnham on the evening of 5th April.

The 450 lots on offer was a society record and just under half sold. This proportion increased, however, in terms of total realisations against reserves.

A total of 55 postal bids were successful and the 20 bidders on the night provided competitive bidding, keeping the auctioneer on his toes.

A large Commonwealth bundle: Gibraltar, Malta, Morocco Agencies, Sarawak, Malaya and many more made £38 against a £20 reserve whilst France and Colonies made £26 against a £1 reserve. A large album of 240 Postcards doubled its reserve of £15 with a mammoth collection (1000s) of GB Postal History down as unreserved, although estimated value was £80 - £120, went for only £22.

The society would like to apologies to attendees for the delay in processing payments at the end of the evening and will endeavour to ensure this doesn’t happen at future auctions.

The Club auction was held, as usual, in the Scout Hut at Harnham on the evening of 29 April. There were 337 lots on offer and just over half sold. This proportion increased, however, in terms of total realisations against reserves. There were fewer postal bidders than usual but the 24 room bidders more than made up for this by being very active and engaging in a lot of competitive bidding making the whole evening a very enjoyable one.

Realisations ranged from 50p to £90 with total sales being £1,233. Local postal history was very popular with a Salisbury P.O. Savings Book making £12 against a £1 reserve and Larkhill Camp postmarks making £9 &amp; £8, again against £1 reserves. A "Red Lion" letter made £11, Bulford Camp £9, a Zeals skeleton £9 and a Chippenham rubber £10 (all against £2 reserves). The wonderful Pewsey postcard featured on the front cover made £42 against the, what some saw as optimistic, £12 reserve. 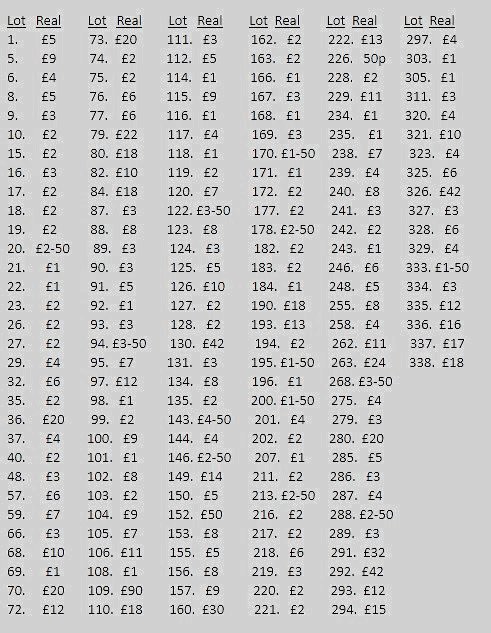 The Scout Hut just coped with the 40, or so, people at the Society auction on 6 February. The auction was a bumper one with 394 lots reserved between £1 and £55 and finished off by 70 unreserved lots which all sold. The total sales exceeded club records at £2,954. 63% of lots sold numerically but the figure was over 85% when taken against the total "value" of lots.

Added to the 35 room bidders were another 14 postal bidders (of whom 11 were successful) and the whole made for some really good competitive bidding. Unusually for Salisbury auctions the GB sold particularly well, especially the older material. The first sign that it was going to be a good evening came as the first 10 lots all sold and then that there were some bold bidders in the room when it came to the British Forces in Egypt 1932 Xmas seals which made £28 mint and £65 used. The same but 1935 Silver Jubilee used made £68.

A fine 1863 Sydney ship letter made a double reserve £40 and an all world collection entered for "Stamp Active", a charity encouraging children to take up the hobby, reserved at £10 ended up with a hammer price of £78. The final section of unreserved lots also started with 5 general lots in albums which made well above estimated values. A fine plate 4 1d black made £105, a collection of QV surface printed, £170 (the highest realisation) and a rather heavily mounted mint E7 10/-, the Somerset House printing, £140 (the highest realisation for a single item).

So, all in all an excellent and spirited sale which will be extremely difficult to replicate next year!

The auction was the biggest yet put together by the Society. The results may have been affected by the inclement weather, with snow on the ground. We heard of several people who had meant to attend but cried off at the last moment. Notwithstanding the total sales of £1400 were also a club record. The 1881 envelope to Queensland, illustrated on the front cover, made a double reserve £105 and the Mulready envelope £90. The 1966 GB birds block of 4 with missing red-brown made its reserve of £65 and the 1911 Windsor first flight card made £38. The biggest percentage on reserve was made by lot 26, 3 Chinese air covers, which reserved at £1 made £28. This could have been more dramatic as the top bid was £67! It confirms the buoyant market for some Chinese material.

The recent big increase in postal charges made the purchase of lot 278, £108 face value of GB commems, and 279, £63 face of definitives, look very wise buys at £78 and £46 respectively as the face value has just increased dramatically for all the 1st and 2nd class stamps! Overall the percentage sales were a bit disappointing with 58% of lots unsold, but, interestingly, non-club members spent more than the &quot;home crowd&quot;.

Now is the time to be looking through your own material to look for lots for the next sale on 6th February 2013.